Surfaces and interfaces play an enormous role in everyday life, primarily due to wetting properties they induce. Looking at micro-scale, liquid is attracted to the surface due to adhesive forces. At the same time cohesive forces lead to liquid forming a shape with the lowest surface area. These interactions can be highly controlled by modifying both surface chemistry and profile. As a result, numerous coating and surface treatment techniques were created through the decades. One of the newest and most promising is a direct surface patterning using femtosecond (fs) laser radiation. In this methodology the focused light of the laser induces complex-light matter interactions on the surface of the sample. Depending on the pulse duration, light intensity and the material of the sample, various textures form on the surface. Those can be sub-diffraction limited ripples, which are induced by the remelting and reorganization of the material under intense radiation, or relatively large grooves, which are formed partially by removing some of the material from the substrate, and partially by the surface-bound interactions. It is important to note, that these interactions are not mutually exclusive, allowing to form nano-ripples onto micro- or even macro-features. This results in possibility to form what is called hierarchical surface features [Fig. 1] which can be exploited in numerous fields, starting with medicine, and ending in heavy industry.

Fig. 1: Differentiation between micro- (a), macro- (b) and hierarchical (c) surface patterns induced using fs laser. Switching between these is relatively easy and requires to only change exposure parameters, like laser power, repetition rate or translation velocity.
Application of fs laser is crucial component to the versatility of this process. First, ultrashort pulses enable to induce various exotic non-linear light matter interactions, such as multiphoton absorption, tunneling ionization, avalanche excitation and similar. It is important to note, that these effects are not thermal in nature, resulting in heat-free material modification. Heating of the process is further assisted by the control of pulse repetition rate. If it is low enough, time between pulses does not allow substantial heat accumulation between pulses, allowing basically cold-processing. This, alongside higher intensity enabled nonlinearities, is the biggest difference from other long pulse-based laser processing techniques. Additionally, by controlling the repetition rate further some heating might be achieved, which can also be exploited if special surface properties and some limited heat-induced effects are needed. Finally, surface chemistry is also influenced by the process. Due to extreme conditions of the processing various monolayers might form on the surfaces. This can be both advantageous and disadvantageous. In the second case processing can be done in special atmospheres (for instant inert Ar) which changes or completely suppress changes in surface chemistry. It is relatively easy to realize, because laser is contactless tool with possibility to integrate special gas chambers or gas nozzles into the processing setup.

A throughput aspect of the process also should be mentioned. To the date, most of the scientific knowledge about light-surface interactions come from small area (less than square cm) patterning. At the same time for true wide-spread usage square meters should be considered. Luckily, with the advent of new generation Yb:YAG amplified laser systems kW level average power can be achieved. It allows dramatically increase fabrication throughput. It is achieved either via high translation velocity, usage of large, structured laser spot, arrays of small ones or combination of several of these methodologies. Furthermore, it can be combined with complex beam or workpiece positioning, allowing processing of both large samples and surfaces with complex geometry. As a result, flat processing speed of up to square meter per minute should be possible. 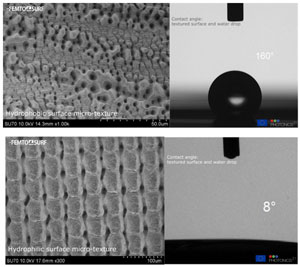 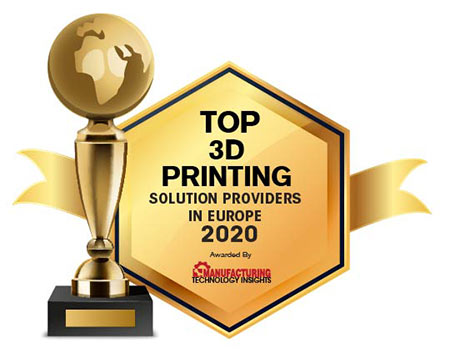